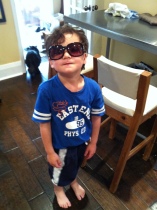 I spy with my sunglassed eye…

So while taking baby K to his first year appointment last week, I noticed a new parenting phenom–pushing iPhones to kids as a way to offload actual parenting duties.

Now, before you think I’m getting all high and mighty, let me preface this entry by saying I’m not against technology. Nor am I against kids using it from time to time. In fact when juggling three kids alone at the local fish and chip restaurant (what the f$%k was I thinking?) I did cave and put Thomas on for the older kids so that I could finish my meal in relative peace. And for a last resort, I readily admit the iPhone has been a pure and utter Godsend.

What freaked me out about last week though was hearing this: “Honey do you want me to read a book? Or play a game on the iPad?” She might as well have been asking “Do you want to go to Grandma’s in Hamilton or jet off to Disneyworld and meet Belle and Snow White?”

More disturbing than this though was looking over to one of the doctor’s rooms and seeing a father and his 4-year-old son both engrossed in their own individual smartphones. There was no eye contact, no conversation, no pointing out the freaky-looking clown on the wall… Ahhhh….what a vision of father-son bonding.

At risk of sounding like an old codger, I really have to wonder if we’ve gotten to the point where we’re actually afraid to allow our kids to experience boredom. That we’re so damn proactive that the lure of touchpads has become a first resort .

I know that sometimes I need nothing more than a few minutes to myself (which frequently is accompanied by a few swigs of red wine) but seriously what are we teaching our kids about human interaction? About waiting? About finding ways to entertain ourselves?

Because my Japanese husband refuses to get Canadian citizenship (another blog entry no doubt) we usually have to spend about an hour in customs when crossing the border. This was fine when we were childless, but a serious pain in the ass now that we’re a family of five.

There we were waiting…and waiting…and waiting…(okay so it may have been only 20 minutes but it felt like an eternity) and the kids were getting antsy. Being the cheapo I am, I refuse to pay the exorbitant roaming fees and so also found myself phoneless. In desperation I resorted to a game of “I spy” to keep the kids entertained.

And you know what? Not only did my kids really get into it but I could see that the older kids of the hillbilly family next to us (who were probably stopped for trying to smuggle moonshine across the boarder) were secretly playing along (instead of a smartphone, the hillbilly parents were trying to comatose their kids by stuffing them full of pork rinds).

Okay, so with the exception of the flags in the office, pretty much everything is “I spy with my little eye something that is grey,” but for 30 minutes the kids delighted in trying to figure out all the little details of this industrial, cold and rather uninviting room.

It was an impromptu bit of fun that we all shared together. And while I’m sure my son would have been proud of his score on his spelling app, it wouldn’t be a “remember that time when we sat in customs on the way to the waterpark?” moment.

EXPLORING ONTARIO BY STAND UP PADDLEBOARD

It's a site about improv!

A blog full of humorous and poignant observations.

My place to talk about my family, my life, and maybe some other stuff too

exploring neighborhoods in Toronto and beyond

Getting found online is a Journey...not a Race

...because parenting is a dirty rotten job and laughing about it is sometimes the only thing that helps.

WordPress.com is the best place for your personal blog or business site.